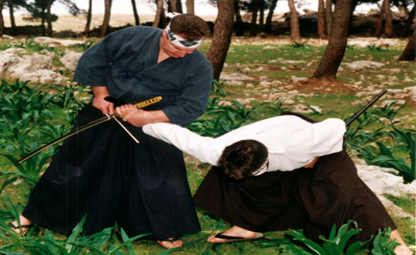 The Jutte (十 手) also called jitte, literally "ten hands", is a weapon of the type baton native to medieval Japan. Composed of an iron bar with a handle and a hilt, in the shape of a mustache facing upwards, to protect the hand. It was used by government officials and police during the Edo period (1603-1868). Since in that historical period all samurai were forbidden to carry the two swords, the police and the shogunate officials adopted it as the main weapon to defend themselves against a katana attack by criminals. In fact, the blade is intercepted in the hilt and locked with rotary hand movements. 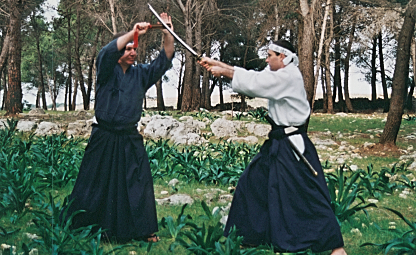 The tessenjutsu (鉄 扇 術) is the martial art of the Japanese combat fan, the card. The use of the fan in combat is mentioned in ancient Japanese legends. For example, it is said that Yoshitsune, the brother hero of the first shōgun Yoritomo, defeated the fort Benkei by parrying his lance with a tessen. This use of the text was taught to him by a mythological creature, a tengu, who also taught him in the art of the sword. The practitioners of tessenjutsu could acquire great skill. Some became so skilled that they were able to defend themselves against an attacker who wielded a sword, and even kill an opponent with a single blow. Like many other Japanese martial arts of that era, tessenjutsu was very sophisticated. For example, a famous swordsman of the late sixteenth century, Ganryu, managed to defeat many enemies with a tessen. In addition to being used in duels against enemies armed with swords and spears, a skilled person could use it to deflect poisoned knives and darts thrown at him.

A kodachi (小太刀), literally translating into "small or short tachi (sword)", is one of the traditionally made Japanese swords (nihontō) used by the samurai class of feudal Japan. Kodachi are from the early Kamakura period (1185–1333) and are in the shape of a tachi. Kodachi are mounted in tachi style but with a length of less than 60 cm. They are often confused with wakizashi, due to their length and handling techniques. However, their construction is what sets the two apart, as kodachi are a set length while wakizashi are forged to complement the wielder's height or the length of their katana. As a result, the kodachi was too short to be called a sword properly but was also too long to be considered a dagger, thus it is widely considered a primary short sword, unlike the Tantō or the Wakizashi which would act as a secondary weapon that was used alongside a longer blade.

A shuriken (Japanese 手裏剣; literally: "hidden hand blade") is a Japanese concealed weapon that was used as a hidden dagger or metsubushi to distract or misdirect. Shuriken came in a variety of forms; some were manufactured, while others were improvised from tools. The edges of shuriken were often sharpened, so they could be used to penetrate skin or open arteries. Shuriken are commonly known in the West as throwing stars or ninja stars although they were originally designed in many different shapes. The major varieties of shuriken are the bō shuriken (棒手裏剣, stick shuriken) and the hira shuriken (平手裏剣, flat shuriken) or shaken (車剣, also read as kurumaken, wheel shuriken). Shuriken were supplementary weapons to the sword or various other weapons in a samurai's arsenal, although they often had an important tactical effect in battle.

◯ In our school, the Daitokai, are still handed down these weapons techniques.