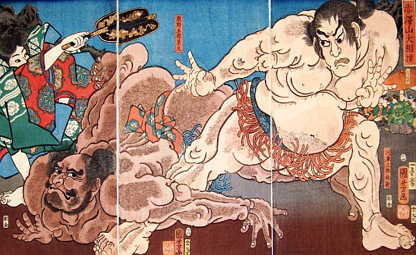 Going back to the origins of Aiki, we arrive to the ancient Tegoi, told in an episode of the Kojiki, one of the oldest texts of Japan : Takemidauchi-no-kami throws Takeminakata-no-kami grabbing his hand with ease, like it was a cane. This Tegoi would be the origin of Sumo and was transmitted both in the legend "Nomi-no-Sukune" and "Taima-no-Kehaya" told in the Nihonshoki and in Sumai-no-Sechie at the court Heian age and in the samurai Sumo of the Kamaura age. The Sumai-no-Sechie was a fight in front of the Emperor is here wrestles from the whole country come together. However, this was different from modern-day. There was no ring and it was more oriented to the samurai arts coming from Tegoi. You can understand it also from the Imperial Edict of Emperor Jinmei: the Sumai-no-Sechie is not a simple sport, it also includes methods to improve one's strength. A the times of Emperor Seiwa, in 868, the Sumai-no-Sechie that depended by the lead of Shiki-bu Minister was transferred under that of Hyo-bu Minister and was more and more characterized by the samurai arts. So the method to protect the Emperor by the use of Tegoi was trasmitted to the Seiwa-genji Clan that has its beginning from his nephew of Emperor Seiwa, Tsunemoto, from whose teachings it was give to Minamoto Mitsunaka, then Yoriyoshi, and lastly Yoshimitsu. [...] 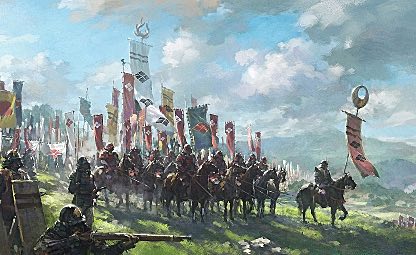 [...] Youshimitsu chose the second-born Yoshikiyo as successor, and gave him the Minamoto banner together with the family armor. At Nobuyoshi's times the grandson of Yoshikyo took the Takeda name, since he lived in the Takeda village of district of Kyoma in Kai. This is the beginning of the Kai-Takeda family from which later on Takeda Shingen was born. In the Takeda family Daito-ryu was handed down the banner with the armor of the Minamoto. [...]


For a closer look at the history of the Takeda Clan connect to:

[...] The name "Daito-ryu" comes from Shinra Saburō Minamoto Yoshimitsu who was the founder of the school nine hundred years ago. When he was a child, he lived in the Daito castle in Ōmi province and so he was called Saburō Daito, from whom the school take its name. However, until Taishō era (from July 30, 1912 to December 25, 1926) [the school] was called "Yamato-ryu" (大東流), even though it was written with the same kanji as "Daito-ryu". [...]

[...] Sokaku, the second-born of Sokichi, was born in the Ise-Gu Takeda castle of Aizu-Onike on the 10th of October of the year of the Banen age (1860). He learned from his father Sokichi the arts of kenjutsu, bojutsu, sumo and Daito-ryu; from Shibuya Toma of the Yokikan dojo, Ono-ha Itto-ryu kenjutsu. In the 6th of the Meiji era (from 1869 to 1912) Sokaku visited Sakakibara Kenkichi who was dear friend of his father, and he also learned the secrets of the Jikishinkage-ryu kenjutsu. In the Sakakibara dojo he practiced with excellent masters of many schools of the Kobusho of the previous government, and deepened the study of: ken, bo, hankyu, zue, shuriken and of the yari, in which he also received a menkyo in Hozoin-ryu sojutsu. [...]